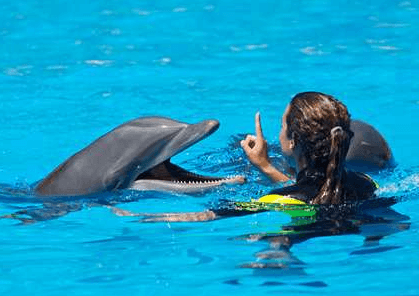 Many of us, when we’re young, have big dreams about what we’d like to be when we grow up. Some of us want to be professional athletes or singers, others astronauts or firefighters, and still others have a passion to somehow work with animals when we get older.

Nicki LaPierre was one of those kids who knew at a very young age she wanted to work with dolphins. At seven years old her parents gave her a dolphin necklace and she instantly fell in love and set her mind on having a career with dolphins. She had such a love for these graceful animals that nothing was going to stand in her way of making that dream come true. Not only did Nicki realize her dream, but she did it in record time, becoming one of the youngest dolphin handlers in the entire state of Florida.

Each and every day when Nicki gets up for work she does so with a big smile on her face because she gets to hang out with the magical creatures she’s been in love with since she was a little girl.

If you also have a passion for dolphins and would love nothing more than to make a living training and interacting with them, then the fastest way to reach your dream is to go to school for a marine biology degree.

Is Marine Biology a Good Career?

If you asked Nicki (and countless others) she would give you a resounding “Yes!”

What most people don’t realize is that marine biology is a term that is used to cover a whole host of disciplines and jobs in the marine sciences. Although they all deal with the study of marine life, they can vary greatly.

For instance, with a marine biology degree you may go on to become a biological technician, marine mammalogist, fishery biologist, microbiologist, and of course, a dolphin trainer, to name a few specific careers. Heck, even economists and sociologists who deal with marine resource issues work within what is considered the field of marine biology.

Getting a Marine Biology Degree

There are many universities and colleges that offer degrees in marine biology, many of them located on the Pacific Coast. A good resource to find academic programs is www.oceancareers.com or look at this book ” How to become a Marine Mammal Trainer“.

For a career in marine biology you can expect to take preparatory classes in basic biology, zoology, chemistry, physics, biometrics, mathematics, and statistics. You may be surprised to learn that you’ll have to take some English classes as well, because marine biologists write a lot of scientific papers with the hopes of getting them published.

You will most likely take courses in oceanography as well as ichthyology and fishery biology. If you hope to eventually have a career where you will often deal with the public or public policies, courses in social sciences are also recommended.

Train Dolphins for a Living

If you’d rather wear a wetsuit to work instead of a suit and tie, then being a dolphin trainer is the career for you. But you might be wondering what exactly dolphin trainers do each and every day.

Generally, dolphin trainers get to work very early, typically before 7AM, and when they arrive they are instantly greeted by thousands of pounds of frozen fish. So one of your first tasks might be to sort all of these fish into buckets (you didn’t think it was all glamorous work, did you?!) and then weigh each bucket carefully to ensure each dolphin is getting the right amount of fish for the day’s activities.

After a bit of cleanup, you might find yourself heading into meetings with coworkers to discuss all of the animal’s health and well-being. After the meeting everyone grabs some buckets of fish and heads over to the pool to say good morning to the dolphins and give them their breakfast.

You might have a show later in the morning and have to set props and get into your costume and then give the audience what they came for, a spectacular show they’ll never forget.

After the show you and your dolphin pals will take a lunch break, but then head back to the pool for for some training sessions where you may teach the dolphins to do flips and other new tricks for upcoming shows. We would highly recommend that you try a Dolphin Interactions in one of our location and speak with a trainer directly. They will always give you great advice.

Work Hard to Get This Career

Becoming a marine biologist and going on to be a dolphin trainer will not happen overnight, and the work will be hard and often exhausting. But it will be equally rewarding. Like Nicki, you may also want to consider doing an internship at an animal park. Dolphin training is a coveted position and there are only so many in the country, so to have the most chance, go for an internship.

Nicki will be the first to tell you it’s not glamorous, the work is hard and you don’t get paid, but you get a chance to learn from the best and if they see potential in you, they just may hire you like they did Nicki.

If you have the same passion that Nicki has and would love to work with dolphins one day, find a good school and get the right degree, work toward that internship, and never give up!

Your Marine Animal Experience and Feed Back

We would love to hear from you and what you did to get involved with Marine Animals. Did you do any of these suggestions that we have listed here? In fact we are so interested in hearing what you have to say that we will entice you to comment, the first 5 comments will receive a $5 Amazon Gift card by email. The only thing we ask that you comment has something to do about Marine Animal Careers or Marine Science.

4 thoughts on “Fast Track Your Way to A Career with Dolphins!”