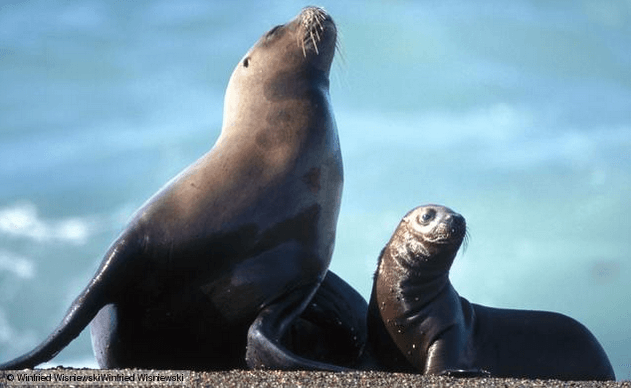 You’d be hard-pressed to find someone who didn’t think sea lions were pretty adorable. With their long whiskers, winged feet and funny little shuffle-walk, they are one of the most unique creatures on the planet. But there are many things people don’t know about sea lions. For instance, they’re highly intelligent. In fact the US Navy has trained sea lions to help protect the waters off the coast of California from terrorist activity. Sea lions were actually used during the Vietnam War and Operation Iraqui Freedom.
Here are 5 other fun facts about sea lions you may not know.

Bulls and Cows and Pups, Oh My!

And the Gold Medal Goes to…

Despite how oddly-shaped they are, sea lions are actually fantastic athletes able to complete rather astounding physical feats. For instance, they can dive to depths of 800 feet in order to find food. And, although they’re air breathers, they can remain under water for up to 30 minutes and can swim at a top speed of 25 miles an hour. Look out Michael Phelps.

There are 7 Different Species

There are 7 different species of sea lion found in the waters all around the world. There is the Steller sea lion, also known as the northern sea lion and found in the North Pacific Ocean. The Steller sea lion is the largest of all the species. Next is the South American sea lion found along the west coast of South America; the Australian sea lion – which is a small species found along the south and west coasts of Australia; the California sea lion, which is considered the most intelligent of the species; the New Zealand sea lion found around the south island of New Zealand; and finally the Galapagos sea lion found only around the Galapagos islands and thought to be related to the California sea lion.

So, what do sea lions eat? Sea lions are carnivores and primarily live on fish. Some of their favorite fish are herring, mackerel, squid and sardines. Although they do have teeth, they tend to be rather piggish and swallow their fish whole.

How do they DO That?

Get Up Close and Personal

Would you like to learn more about these amazing animals and see (or rather sea) them up close? At Ocean World Adventure Park in Cofresi, Puerto Plata, Dominican Republic, you can swim, play, hug, kiss and feed the sea lions in their natural habitat. It’s an experience like no other you’ve ever had. Here is a video to see the Sea Lion Encounter in Puerto Plata  program. We also offer swimming with the Sea Lions in Miami, Nassau Bahamas, Punta Cana Dominican Republic, Florida Keys, Panama City Beach, Oahu Hawaii, and Cancun Mexico.