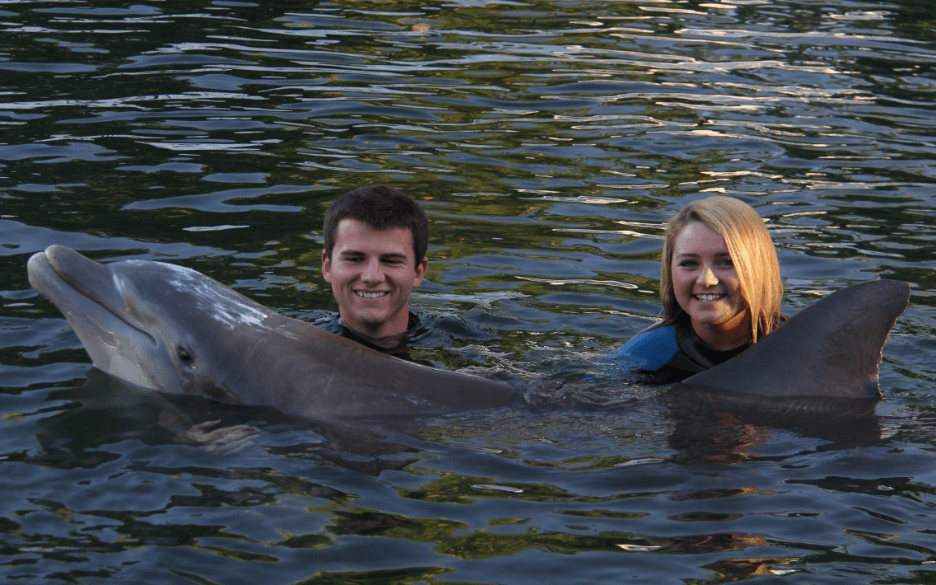 There’s just something totally unique about the Florida Keys. People there move at a slower pace and to the beat of their own drummer. The scenery is stunning and the turquoise waters are some of the clearest and most inviting on the planet. Once you experience the Keys for yourself, you’ll forever belong to a special club of people who have truly tasted life firsthand. And if you want to taste excitement firsthand, then you’ll enjoy swimming with the dolphins in the Florida Keys.

A Video Tour of Theater of the Sea, Florida Keys

Spend a Memorable Day at Theater of the Sea

Theater of the Sea is one of the coolest destinations on the planet. The facility has two goals always: to provide a safe and nurturing home to many creatures of the sea, and to inspire awareness and sensitivity toward animals in all of the visitors that pass through each year.

Family owned and operated since 1946, Theater of the Sea is the second oldest mammal facility in the United States and one of the oldest in the entire world. Once you get your first glimpse of the lagoons your breath will be taken away. Lush, tropical gardens surround crystal clear pools where dolphins, sea lions, sea turtles and vibrant fish swim and play. It is the epitome of paradise.

Plus, Theater of the Sea is a pioneer in sea animal interactive programs, which means you’ll get to get up close and personal with some of the most amazing creatures on the planet and learn all about them while having the time of your life.

Things to do in the Key Largo Area

Theater of the Sea’s Swim with Sea Lions program is a totally cool and a unique way to interact with these adorable and charming puppies of the sea, as they’re often called. Spend time in their natural salt water habitat and get a hug and kiss. You’ll also have the opportunity to swim with sharks and stingrays – if you dare!

There are also many exciting activities outside of the park. For instance, if you’re a snorkeling enthusiast, then you’ll want to head to John Pennekamp Coral Reef State Park. Established in 1963, the park was the first undersea park in the entire United States.  The seascape is a mix of seagrass beds and mangrove swamps as well as beautiful coral reefs. The park, which is undoubtedly the most stunning and diverse of all living communities, serves to preserve a portion of the only living coral reef in the continental United States and is on the National Register of Historic Places.

You can’t come to the Florida Keys and NOT swim with dolphins! That’s like going to Madi Gras and not getting any beads! The Theater of the Sea’s dolphin programs get you up close and personal so you can interact with dolphins in their natural lagoon habitat. You’ll be thrilled to get a hug and kiss and experience dorsal tows and foot pushes!

Sshh… did you hear that? That was the Florida Keys calling. They want you to come for a visit and let your hair down. And we mean it when we say a day spent at Theater of the Sea is a day you’ll remember for years to come.