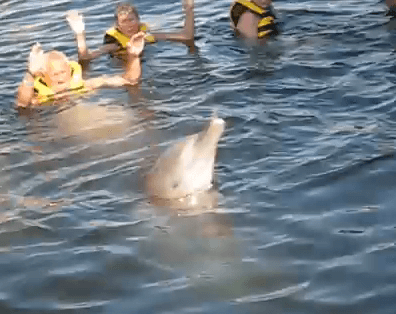 Beautiful Puerto Plata is located in the Dominican Republic, which is the most diverse and second largest country in the Caribbean. Just south of Miami, the location is easy to get to. For instance, from New York City it is only a four hour flight, and from most European cities it is only an eight hour flight. So, if you’ve ever wanted to swim with dolphins in Puerto Plata, rest assured you can and it’s only a hop-skip-and-a-jump from where you live.

The Dominican Republic is known for its hospitable and welcoming people, its rich history, intriguing culture and astounding nature. Visitors have a ton of entertainment options at their fingertips. They can explore ancient ruins and relics of centuries past; take part in a one-of-a-kind ecotourism adventure in one of the many magnificent national parks, mountain ranges, rivers and beaches; eat their heart out in a luxury dining establishment with sumptuous food, or dance the night away to the thrilling rhythm of the merengue.

One of the reasons the country is so breathtakingly beautiful is because it is surrounded by the Atlantic Ocean on the North and the Caribbean Sea on the South. The tropical island is lush with vegetation and offers almost 1,000 miles of gorgeous, pristine coastline that is home to some of the world’s top beaches, magnificent resorts and hotels, and a variety of sports, recreation and entertainment options.
And speaking of entertainment options, would you like to swim with dolphins in Puerto Plata? Well, you’re in luck!

Swimming with Dolphins in Puerto Plata

When it comes to swimming with dolphins in Puerto Plata you have different programs to choose from.

There’s the Royal Dolphin Swim Program, which puts you in the shallow water where you can experience touching, feeding and training a dolphin. You’ll also have the opportunity for a deep-water interaction with a dolphin and that’s where the magic really happens. How would you like a dorsal fin ride from one end of the natural salt water lagoon to the other? Or maybe you’d get a kick out of a foot push or a belly ride? Then again you may want to just swim beside these amazing creatures and watch them move freely through the turquoise waters.

Besides swimming with the dolphins, Dolphin World also offers snorkeling in the beautiful aquarium, a Dolphin & Sea Lion Show, which visitors have called one of the best shows in Puerto Plata, Dominican Republic. There is also the Bird Exhibit, Tiger Grotto, and Iguanas Exhibit. And, after all of this adventure and memory making, you’ll most likely be hungry. Dolphin World also provides a buffet lunch and transportation.

Bottlenose dolphins are unlike any other animal on the planet and you’ll have a chance to get up-close-and-personal. Well known for their intelligence and charisma, they are friendly, playful, and easily trainable to perform complex tricks.
In the wild, these amazing swimmers can reach speeds of over 18 miles an hour. But, like other mammals, they can’t breathe under water and so they must surface two or three times per minute to take a nice big breath.

Bottlenose dolphins are very social creatures and travel in groups. They communicate with each other through a complex process of squeaks and whistles. They are also very emotional creatures and have exhibited the same type of altruism as human beings. For instance, schools of dolphins have been known to come to the rescue of an injured dolphin and help it to the surface.

Bottlenose dolphins use echolocation to track their prey, and can make up to 1,000 clicking noises per second. The sound of these clicks travels underwater until they encounter objects, then bounce back to their dolphin senders. This process of sending clicks out and having the sound bounced back reveals the location, size, and shape of the dolphin’s target.
So what DO dolphins eat anyway? Well, they often feed on bottom-dwelling fish, but they also eat shrimp and squid. And, being so clever, dolphins can also be spotted following fishing boats around in hopes of dining on leftovers.

What Are You Waiting for?

Vacations come once a year, but trips of a lifetime happen rarely. Your time swimming with these magical creatures in the gorgeous setting of Puerto Plata is an experience you won’t soon forget!